O@Q’s Food Security campaign has been working on this video for a few weeks, and we’re really excited to finish release it! We wanted to draw attention to the winter Farmer’s Market – many Queen’s students don’t realize that this happens every Wednesday in the lower JDUC during the winter, instead of outside like the fall and spring.
There’s always a fantastic array of organic baking, local apples, vegetables, cheeses, preserves, and hot lunch. And what better way to support LOFT food, get groceries, and help your local economy, all from the convenience of campus?

We interviewed some friendly vendors, students, and “experts” to find out what they think about the Market.

Have you ever heard of ‘terraculture’? It means farming for the whole planet, which is something we as a global population must do if we are to continue feeding ourselves in the face of climate change. Terraculture is food production that combines the best practices of conventional agriculture with organic agriculture to be both productive and sustainable. Only agriculture that cares for ecosystem health will in the long term be able to care for human health as well.

I remember thinking the local grocery stores in my hometown looked like an after school special. During certain times of the day, it was staffed almost entirely by people from my high school. Standing behind the thinly sliced stacks of salami was the mousy haired boy with thick eyebrows, whose legs I had accidentally stepped on when trying to navigate the crowded hallways. There, in the baked goods section, was quiet lanky kid arranging baguettes in woven baskets that were set out in an attempt to create a rustic, old fashioned feel to the process of buying bread, though the contrast with the polished tiled floor ruined the illusion. Cheery, red apples glowed wanly under yellow fluorescent light, waxy coatings lending them an unnatural shine. Like many other grocery stores, it has a very industrious atmosphere. Stacks upon stacks of food converged to rows upon rows of cashiers. Staffed with grudging kids who had recently grown too old for an allowance, people came in and out without a thought.

Recently, after being introduced to the ideas of food security, I was strongly encouraged to try and buy LOFT (local, organic or fair-trade) foods whenever possible, and within reason. Foods fulfilling any of these criterions can be pretty expensive at places like Metro and such, especially when you’re on a student budget. This is what led me to start shopping more at local Farmer’s Markets. Maybe it’s because I’m a person who’s always been nostalgic for the older and simpler days, and a silly tendency to romanticize eras in which I have never lived, but I absolutely love places with atmospheres like those.

It’s an entirely different shopping experience. Instead of the neat, utilitarian set up of any local grocery, you usually get a mess of colorful tents and tablecloths flapping cheerfully in the wind. There you can find your usual fruit and vegetables, but also much more. I’ve gotten freshly made zucchini loaf that I had to cautiously take from a baked goods display, mainly because of the cloud of bees hovering above, clearly attracted to the sweet smells. In retrospect, it was a stupid idea, but I was probably very hungry. The best apple cider I ever had? I used to buy bottles of it from a family who ran their own apple picking orchard back at home. They told me they bottled it up to sell commercially, but it didn’t taste quite the same as when it was fresh. And is it just me, but does anyone feel extra fancy when they are walking down the street with a freshly made local baguette, or loaf of bread, tucked under their arm? Just be careful, paper bags are not the sturdiest and there’s a chance your bread will slip out and fall into a puddle, which is very upsetting. Lastly, though not food related, you can sometimes find really interesting pieces of clothing. Sometimes it’s made by the locals themselves, but sometimes it’s been brought back by people who travel around the world. A woolly hat from Nepal for $10? I want. I also have a weak spot for pretty saris and wall hangings from the Middle East. I adore clothes with an interesting story or history (like hearing about how the wool in my scarf is made from sheep who frolic happily in the Himalayas) –  it’s a marketing technique I never stop falling for.  As well, by buying pieces from locals, you are supporting those who make these things for a living in a more direct way. So maybe next time, try ditching the stagnant and nondescript grocery store smell for the fresh air at your local farmer’s market, and spend an afternoon there. You’d be surprised what you can find.

The L in LOFT is not always easily accomplished and can get even more complicated when you add sustainability to the mix.

Local Food Plus (LFP) is a Canadian non-profit aiming to educate consumers, producers, and distributors about the benefits (and standards) of local and sustainable foods. LFP developed criteria to certify local sustainable foods so that consumers know, and understand, exactly what they’re purchasing.

The definition of local is often ambiguous ranging from 100km radius to within a province or group of provinces. Likewise, sustainable is overwhelmed with limitless conditions. LFP seeks to amalgamate the two concepts identifying local sustainable food as:

The LFP label is subject to independent third party expert inspections. And unlike organic labelling systems, LFP does not charge farmers for the entire cost of certification but charges a minimal fee while the rest of the expenses are paid through LFP fundraising (reducing the burden on small-hold farmers).

LFP got its start on the University of Toronto campus proving that the differences students make in their community can extend to the entire food system.

Want to consume in a way that is more environmentally, morally and economically sustainable? Try eating local!

With food, energy and transportation being some of the biggest sources of environmental degradation, it is the everyday choices we make that matter. But what constitutes local production? One can consider local to be food produced no more than 200km away from their home or another can consider it to be anything produced within the province. Either way, by eating locally we are not only investing in Canadian farmers, but transportation costs are decreased and food miles are diminished. If Ontarians consumed locally, the emissions equivalent to almost 16,000 cars can be saved! Becoming aware of the difference your food choices make is the first step in collectively moving towards a more sustainable future. If you really want to become a conscious consumer, choose eating both locally and organically. Pesticide use can cause cancer, birth defects, ADHD and autism and not to mention the amount of toxic run-off that finds its way into our water sources. We need to come to the realization that food can no long be synonymous with convenience and extensive availability if we want to move towards a more sustainable future.

Here are some images from our event “The Ultimate LOFT Challenge”! This event compared products such as red peppers, honey, chocolate, apples, and ketchup that were produced locally against the same product produced internationally. 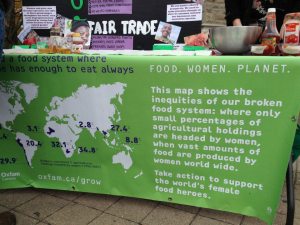 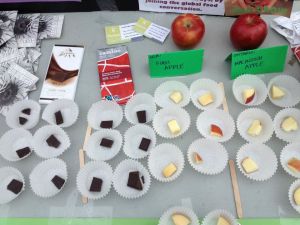